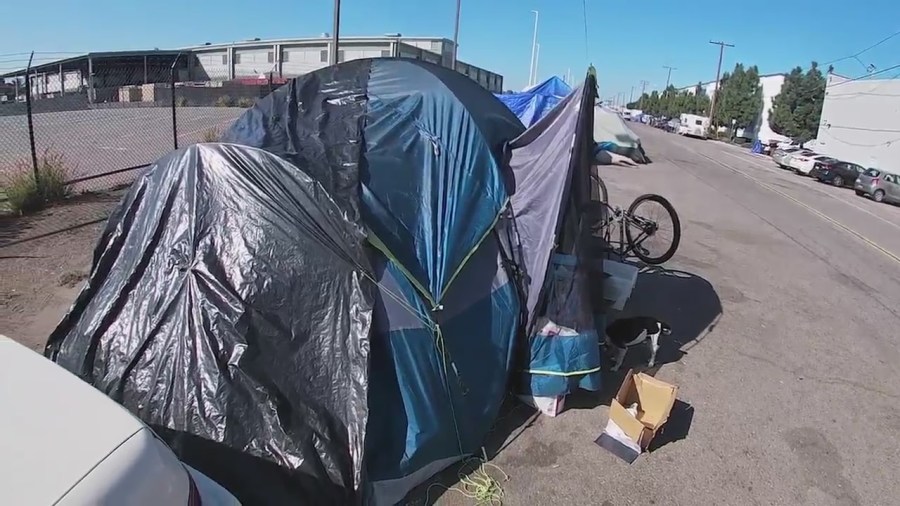 SAN DIEGO – Frustration among business owners in the Midway District was growing Wednesday after the city cleaned out a large homeless encampment, only to see it return the next day.

The camp is located along Sports Arena Boulevard, between Pacific Highway and Rosecrans Street.

“They just had everybody pick up their stuff, move it to the other side of the street and then they cleaned out the trash, which is great, but then they moved the encampments back out,” said Karen Andersen-Thatcher, co-owner of Walter Andersen Nursery located on Enterprise Street. “And as you can see there’s already trash out there. There’s already feces, urine and other things out there. ”

She said business owners in the area have been asking the city to do something since the camp started about 10 months ago.

“I’ve had customers call and say they drove down the street, but now they’re not comfortable getting out of their car,” she said. “We’ve had homeless lock themselves in our restroom and not come out so now we have to have locks.”

A spokesman for Mayor Todd Gloria told FOX 5 the city has been doing homeless outreach, but only seven of about 183 people living in the camp accepted help going to a shelter. He said fully clearing the encampment will require continued cleanups along with continued outreach. The next cleanup is scheduled for Thursday. The city said no one was arrested during the cleanup since everyone complied.

FOX 5 asked people living in the encampments to talk about a possible solution, but no one was willing to go on-camera.

A man drove by the camp and told FOX 5 he used to live in the encampment. He said in order to get people off the streets, Section 8 housing vouchers should include more people on the ticket.

“You’ll get all these people off the streets trust me,” said Bobby Ewing, a homeless advocate.

“Out here it’s very dangerous and it’s very unsafe,” she said. “And the lack of enforcement has empowered them. They know nothing is going to happen to them so they pretty much run the street.”